Beautifully created cottage/home, with the appeal of a Coastal Living ethic, and with a separate garage/studio space (artist? home occupation?), spacious decking to expand summer living pleasures, deer fenced garden and orchard, and an essential sense of calm, to rest the soul

The facilities available depend on location and may include: mooring buoys, dockage, dinghy dock, stern ties, outhouses, walking / hiking trails. Some portions of the park are ecological reserves and are not open to the public.

Civic politics…on the Gulf Islands this means the Islands Trust.

Every three years, throughout B.C., one elects mayors and councillors, if the area is a municipality.

The Gulf Islands are not municipalities. In 1974, the provincial government created the Islands Trust…its mandate is ““.

Strict zoning/density bylaws were brought into being to control growth.

Two trustees were elected for each Island.

The “water access only islands” were tied to a ferry accessed island, when it came to specific bylaws, particularized for each island, over and above the umbrella items that apply overall to all Gulf Islands.

The Trust’s mandate is to oversee land use bylaw issues.

Things like building permits, septic installations, etc., were under the control of the CRD (Capital Regional District), if close to Victoria. Vancouver and Vancouver Island have their equivalent bodies. The CRD would oversee all unincorporated areas close to Victoria, including the Southern Gulf Islands.

Over time, the OCP (Official Community Plan) for each Island would have been amended to reflect a particular Island’s concerns.

In the 1990s, reflecting a time where the government was needing to offload some costs generally, the then NDP government came up with the idea of creating a Gulf Islands Municipality category.

Under this, the Trust would remain in place, with 2 elected Trustees, but the CRD position (also an elected office, at civic election time) would be replaced by an elected council, and the Island choosing this specialized form of municipal structure would be more autonomous with costs. This would, of course, save the government money.

The two islands approached about this type of municipal structure, due to their population and infrastructure growth, were Bowen, in Howe Sound, and Salt Spring. Both Islands turned down the proposal, in a referendum, chiefly out of fear that taxes would rise.

In a second referendum, at a later date, Bowen voted yes, and that Island does have this Gulf Islands Municipality structure in place.

On Salt Spring, a group called Islanders for Self-Government has recently been attempting to get the government to approve a second referendum, to allow Salt Springer’s to reconsider their earlier “no” to the proposal.

In the intervening years, taxes have risen sharply, under the Trust/CRD format, and further costs are set to escalate. The current Trustees have enjoyed a second term, and have put in place many bylaw amendments, re-interpretations perhaps, that are meeting with opposition from many Islanders.

This is an , and in the Fall two trustees and one CRD director will be elected. For many, the desire to see a referendum offered, on the issue of incorporation, keeping the Trust but replacing one CRD director with elected councillors, and the Island being responsible for itself, is paramount.

If you’re a property owner on Salt Spring, it’s very important to keep up to date. Several changes or re-interpretations do appear to be underway, and many of same will affect you. Whether you’re a seasonal or a full-time resident, be informed!

Check out the Trust’s website, and read all of the proposed changes. Pay attention to requests to raise taxes to implement some ideas. Apathy is not an option!

Ask the ISG (Islanders for Self-Government) group to explain their ideas. Again, just “be informed”.

Ask the Chamber of Commerce to be accountable, too, in their mandate (which is to lobby the government on behalf of small business…to give local business a voice). A strong business community is the marker of a lively and enriching overall community. Salt Spring’s Chamber has ignored this duty in the past, by choice.

So many shifts and changes lately, and Salt Spring is not exempt. Important to listen to alternative opinion, and to speak one’s own calmly…courtesy is an aspect of strong community spirit, too.

This is an important year in the Island’s “life”…it needs all the Islanders to step forward and to “act” for the Island’s best interests.

Being informed is a start….

December 3rd is Ladysmith’s “light up” — had to be postponed a week due to unexpected Arctic Cold Front bringing snow and chill to our usually temperate “wet coast”!

Duncan’s “light up” is this weekend, too…fireworks and entertainment!

Fairmont Empress hosts the annual Christmas tree fundraiser (for B.C. Children’s Hospital)…the Edwardian grandeur of the hotel, plus its homage to Victorian Christmas traditions, plus afternoon tea, and those myriad decorated trees…it’s a great way to enjoy some Christmas spirit!

So many wonderful events, things to do and places to visit, on Salt Spring Island and on nearby Vancouver Island…catch up with family and friends…and remember those on their own, who would welcome some holiday cheer.

Read Charles Dickens: “A Christmas Carol“…he caught the gist of this season of gratitude and inclusion.

The holiday season is with us…celebrate and encourage both Peace and Joy.

Since 1869, Canada’s immigration programs have helped build a community of citizens respected around the world.

CIC works in partnership with several departments and agencies to carry out these activities.

This is a very appealing “Island story” of Island-style entrepreneurship! Linda Quiring & Bill Goddu, of the Saltspring Soapworks, came to the Islands in the 1970s.

Linda Quiring Bill Goddu Linda, always interested in gardening and herbs, began by creating her personal lotions, salves, & ointments — an interest in the healing arts/herbology was the basis for this “home occupation”. Then, in the late ’70s, Linda began to investigate the growing Craft Fair market, and began to sell her line of herb preparations.

En route to creating a shampoo, however, Linda came across a soap recipe, and tried it. That first recipe ended up with 50 bars of soap! Linda added the soap to her herbal line at a craft fair, and it was the soap that sold out completely! Several experiments later, and an innovative packaging concept, & the Saltspring Soapworks was fully fledged. Creating their product in their home, then moving the “factory” to a barn on their property, & then to an industrial building — all locations on Salt Spring! — charts the growth of this very interesting and profitable business enterprise.

Soapworks Store The product line can be purchased at the Saturday Morning Market in Ganges Village, and also at the company’s own retail outlet in Ganges. This product line is also available in better gift stores throughout North America, and is also marketed in Japan.

Linda is drawn to the concept of a viable business, that can be a meaningful part of one’s life, and still allow one to enjoy the gardening, cooking, hiking pursuits that are also a part of Linda & Bill’s lifestyle. This is a “small is beautiful” concept!

Be sure to visit Bill on Saturdays at the Market! Don’t leave Salt Spring without one of the lovely soaps, shampoos, essential oils, etc., available from the very pretty retail outlet on the “main street” of “downtown Ganges”! 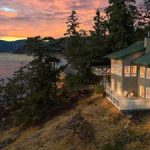 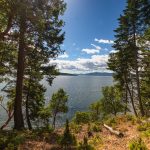